In the middle of the pandemic, many people predicted the end of globalization. However, as the world picks up speed again, we’re coming to realize that globalization didn’t go anywhere, though it was redefined. Let’s analyze what globalization will look like in the future.

The world is leaving behind the worst of the pandemic, according to global market data. The US economy is growing (by 6.5% in the last quarter, compared to the same period in 2020) and so is the EU economy (by 2%). Even the Latin American economy has reasons to be hopeful: according to the United Nations Economic Commission for Latin America and the Caribbean (ECLAC), the region will grow by 5.9% this year. Although these numbers reflect only a partial recovery, they reveal a positive trend for the near future. In one of my previous articles, we talked about adopting a mentality of abundance, allowing us to reposition our organizations in relation to our resources. Now I’d like to rethink the context in which we’ll have to organize our value chain in the years ahead.

It’s not the end, it’s a reordering

During the pandemic, plenty of voices predicted the end of globalization. Today, we know globalization is still with us. We continue to buy smartphones put together in Taiwan; cars made in Xinjiang, China; wine from grapes harvested in Stellenbosch, South Africa; meat packaged in La Pampa, Argentina; shirts from Izmir, Turkey; and shoes designed in Romagna, Italy. By November 2020, the global exchange of goods had returned to pre-pandemic levels, according to data from CPB World Trade Monitor. When 2021 comes to a close, this activity will have grown by 6.6%, according to the World Trade Organization. However, though commerce is recuperating, it is not exactly back to normal. As Steven Altman and Phillip Bastian wrote a few months ago for the Harvard Business Review: “Global business is not going away, but the landscape is shifting, with important implications for strategy and management.” 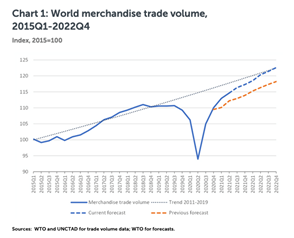 Cost is no longer everything

The pre-pandemic model of globalization followed a simple rule: the goal was to lower production costs and grow profits as much as possible. In plain English: companies made stuff wherever it was cheap and sold it wherever they would get paid more. The fight against COVID-19 interrupted this global value chain for several months. Commercial activity around the world fell by over 10%, according to data from the International Monetary Fund. And although this drop wasn’t much different from the one experienced in the wake of the 2008-2009 economic crisis, our present moment suggests we’ll soon be dealing with a very different kind of globalization.

One of the first reactions to the global economic standstill was to speculate that “off-shore” would be replaced by “near-shore,” as organizations sought to guarantee their subsistence. The stated objective was the following: to look for answers nearby, with less exposure and dependence on third parties. However, following an initial rebound after the start of the pandemic, more and more companies are abandoning their plans to bring production plants closer to their markets. The reason? As it happens, despite increased costs, such relocations did not actually guarantee a more resilient value chain. Instead, a more effective alternative has appeared: efficiently diversifying the value chain by combining both local and off-shore production centers. To achieve this solution, investments need to focus on growing and reorganizing technologies and inventories. And beyond these technical aspects, such a redesign also needs a rethinking of companies’ guiding values.

A new set of values

If, before the pandemic, the configuration and extension of a value chain was defined by cost, then COVID-19 has forced us to reevaluate this definition. These past few years have taught us why our production processes need to: 1) happen in a context of freedom and transparency, of democracy as opposed to dictatorships; 2) be respectful of the environment and enable sustainable practices; and 3) be attractive to today’s global talent. Sustainability, accessibility, and talent acquisition have, today, become factors as — or even more — important than cost when designing value chains.

For an example of this, see what’s happening in China, embroiled in an ongoing commercial war with the United States, a conflict that is forcing smaller economies, like the European Union and the Commonwealth, to pick a side.

The great Asian power won’t be going anywhere. Nor will its allure diminish. But the reality is that, since last year, companies are downscaling their operations in China, including Microsoft, Adidas, GoPro, Hyundai Motors, and Samsung. In a survey of 260 global companies carried out last year by Gartner, 33% admitted they had already started going down this reduction path. They’re all “balancing efficiency and resilience,” as the report puts it.

China, despite its economic prowess, is suffering because it cannot offer its commercial partners two essential guarantees: freedom and trustworthy laws. If you have doubts about this assertion, just ask yourself this: when was the last time you saw Jack Ma (founder of Alibaba) or Cheng Wei (founder of the transportation app Didi, used by 68 million people every month) in public? As The New York Times headlined a few weeks ago: “What China Expects from Businesses: Total Surrender.”

People achieve their maximum potential in an environment characterized by freedom, as Karl Marx himself put it. The city-state of Florence proved this a few centuries ago. Thanks to its openness, freedom, and support of knowledge, it became the cradle of the Renaissance. Similarly, San Francisco’s socioeconomic ecosystem, which mixes counterculture with capital, gave birth to the global innovation center that is Silicon Valley.

The pandemic has forced us, as both consumers and organizations, to question the sustainability of our way of life. Faced with a world that is technologically more interconnected than ever before, we are now questioning everything, from how the products we consume are made to how we make our own products. As part of the workforce, we’re also pondering the meaning of value. We’re no longer willing to sacrifice our existence for things that aren’t aligned with our values, as demonstrated by the ongoing wave of resignations currently rocking some of the strongest economies in the world.

Finally, capital itself — which, from the start, has always valued profit generated by an innovative workforce — is moving away from the promise of low cost. With the help of modern technology, it’s prioritizing the freedom to redesign and adapt productive chains around the world. The pandemic has torn down the last surviving prejudices we had about commitment and productivity. Just ask Great Britain, now living through its own value chain woes. Since Brexit, essential services, like driving and procurement services, cannot find enough talent to sustain themselves. As a result, the government has had to bring in the Army to guarantee the availability of basic products like fuel and food.

Post-pandemic globalization is challenging us to reorder our values and transform our organizations into valuable links in the new global value chain. In this sense, supporting knowledge, freedom, guaranteed rules, and sustainability are key. This is the mentality that should guide us, as leaders, as we design the business models our organizations should follow on the road ahead — which is the road we’re already on.